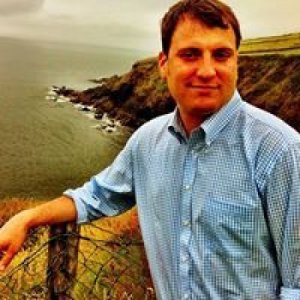 
Lester is an expert on the impact of minimum wage and living wage policies on urban economic development. 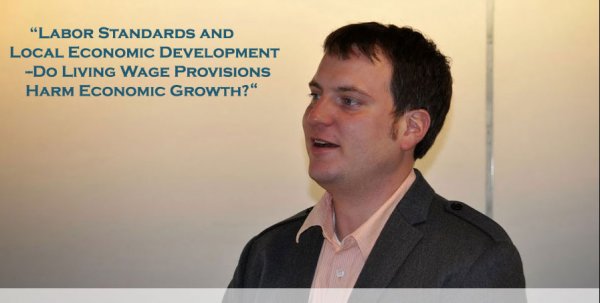 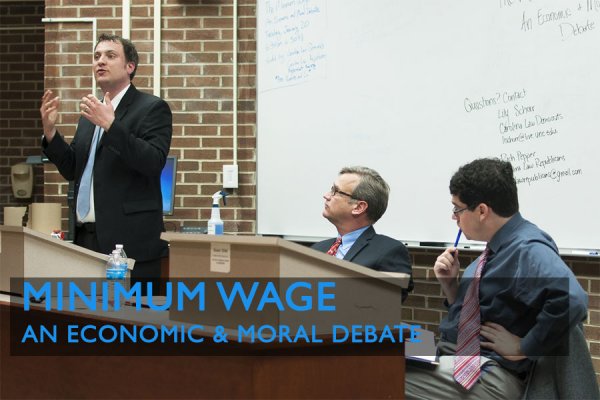 T. William "Bill" Lester is an Associate Professor of City and Regional Planning specializing in economic development. His research focuses on the role of labor market institutions in fostering greater equity at the urban and metropolitan scales. His is an expert on the impact of minimum wage and living wage policies on urban economic development.

Lester employs quantitative and qualitative methods drawn from the fields of labor economics, political science and regional development. While his research on the minimum wage and living wage has garnered national attention recently -- including a mention in the State of the Union address -- he continues to broaden his research agenda within the field of economic development.

He recently completed a collaboration with Nikhil Kaza, Daniel Rodriguez, Yan Song and Phil Berke on a project funded by the What Works Collaborative that examines the links between economic development and land use and builds a strategy for preserving industrial land in urban areas.

Lester is also continuing a variety of research projects aimed at evaluating the effectiveness of economic development incentive programs. Specifically, he completed a paper published in Urban Studies focused on the effectiveness and economic impact of Tax Increment Financing (TIF) in Chicago. Some recent articles in Chicago Magazine feature his work and highlight several policy reforms. He also published an evaluation of the use of economic development incentives in North Carolina, which will appear in Economic Development Quarterly.

Lester is also engaged in numerous projects that study the potential for environmental solutions to generate meaningful employment opportunities in the so-called "green economy."

Employment Opportunities in the Green Economy

Scholar in Residence, Center for Urban and Regional Studies (2013) (professional)

Awarded by the Association of Collegiate Schools of Planning (ACSP), for best paper published in 2012 in the Journal of Planning Education and Research (JPER).

Now an assistant professor at the University of North Carolina at Chapel Hill, Bill Lester started thinking about the impact of higher minimum wages and other worker-friendly mandates in American cities on the structure of low-wage jobs. And this month, he published one of the first qualitative studies on a new wave of employment legislation, focusing on what’s happened in the industry where he used to work: Restaurants.

A living wage is also good for business and its bottom-line. Better pay reduces absenteeism and turnover – the two biggest drags on business productivity. And, the workers who stay on the job tend to be more educated and skilled, according to Dr. William Lester, a UNC-Chapel Hill professor who specializes in this field...

2/23/2013 ince 1994, about 200 cities have passed “living wage laws” that set minimums for workers for private companies that have municipal contracts, get local tax breaks or rely on city facilities. In November, for example, voters in Long Beach, California passed a ballot measure that raises the minimum wage for hotel workers in that tourist city to $13 per hour and guarantees hotel workers five paid sick days per year. A recent study by William Lester of the University of North Carolina and Ken Jacobs of the University of California-Berkeley found no difference in employment levels between comparable cities with and without living wage laws. They disproved the claim by that these laws drive away business or lead to reduced employment.

12/18/2013 T. William Lester, an assistant professor at the University of North Carolina at Chapel Hill, compared Chicago’s TIF-designated districts with non-TIF districts across three parameters—employment change (from 1990 to 2008) and business creation and building permit activity (from 1994 to 2006). “Chicago’s use of TIF has not resulted in positive net employment benefits,” he says. What’s more: “Building permit activity—which is the category that is most likely to be affected by TIF—is very close to zero and insignificant.”

More than 40,000 New Zealanders got a pay rise on Friday - but with the 25 cent increase to the hourly minimum wage working out to just ten dollars a week, before tax, it will barely cover the cost of a celebratory drink come next payday. So could the minimum wage have been raised by more without lengthening the dole queue? Ideas talks to former minimum wage worker Miriama Francis; the owner of Auckland's Cherry Cleaning Company, Sid Day; US economist William Lester; and Auckland University professor Tim Hazledine and AUT senior lecturer in economics Gail Pacheco...

Vestal: For some, a higher wage makes good business sense

T. William Lester, a professor at the University of North Carolina and one of the paper’s co-authors, said that the researchers compared all neighboring counties in the nation where there was a difference in the wage between 1990 and 2006. They wanted to see whether increasing the minimum wage did indeed lead to a drop in employment in the restaurant industry. “What we’re finding is there wasn’t any effect,” Lester said...

Replacing Truth with Social Hope and Progress with Re-description: Can the Pragmatist Philosophy of Richard Rorty Help Reinvigorate Planning?

The Role of History in Redistributional Policy Discourse: Evidence from Living Wage Campaigns in Chicago and San Francisco

The Long Term Employment Impacts of Gentrification in the 1990s

When are Economic Development Incentives Successful: Evidence from a Time-series Analysis from North Carolina

2016 We provide the first estimates of the effects of minimum wages on employment flows in the US labor market, identifying the impact by using policy discontinuities at state borders. We find that minimum wages have a sizable negative effect on employment flows but not on stocks. Separations and accessions fall among affected workers, especially those with low tenure. We do not find changes in the duration of nonemployment for separations or hires. This evidence is consistent with search models with endogenous separations.

Estimating the size and impact of the ecological restoration economy

2015 ABSTRACT: Domestic public debate continues over the economic impacts of environmental regulations that require environmental restoration. This debate has occurred in the absence of broad-scale empirical research on economic output and employment resulting from environmental restoration, restoration-related conservation, and mitigation actions — the activities that are part of what we term the “restoration economy.” In this article, we provide a high-level accounting of the size and scope of the restoration economy in terms of employment, value added, and overall economic output on a national scale. We conducted a national survey of businesses that participate in restoration work in order to estimate the total sales and number of jobs directly associated with the restoration economy, and to provide a profile of this nascent sector in terms of type of restoration work, industrial classification, workforce needs, and growth potential. We use survey results as inputs into a national input-output model (IMPLAN 3.1) in order to estimate the indirect and induced economic impacts of restoration activities. Based on this analysis we conclude that the domestic ecological restoration sector directly employs ~ 126,000 workers and generates ~ $9.5 billion in economic output (sales) annually. This activity supports an additional 95,000 jobs and $15 billion in economic output through indirect (business-to-business) linkages and increased household spending.

2015 ABSTRACT: For decades, industry groups and many media outlets have propagated the notion that environmental protection is bad for business. However, missing from this public debate has been a detailed accounting of the U.S. economic output and employment that are created through conservation, restoration, and mitigation actions, which we call the “Restoration Economy.” In this paper, we review related literature, including 14 local and state-level case studies of privately funded environmental restoration projects. We also review federal and state government programs that fund restoration throughout the United States, revealing the complex nature of this sector. We find growing evidence that the restoration industry not only protects public environmental goods but also contributes to national economic growth and employment, supporting as many as 33 jobs per $1 million invested, with an employment multiplier of between 1.48 and 3.8 (the number of jobs supported by every restoration job) and an output multiplier of between 1.6 and 2.59 (multiplier for total economic output from investments). The existing literature also shows that restoration investments lead to significant positive economic and employment impacts and appear to have particularly localized benefits, which can be attributed to the tendency for projects to employ local labor and materials. While these initial figures are promising, the extent of environmental restoration activities and benefits at a national level is not yet well understood. Our findings reveal the need for a methodological framework for more accurately and broadly estimating the size of the U.S. restoration sector and its impact on the U.S. economy.

The Economic Integration of Immigrants and Regional Resilience

Are America's Inner Cities Competitive? Evidence from the 2000s

2015 In the years since Michael Porter’s paper about the potential competitiveness of inner cities there has been growing evidence of a residential resurgence in urban neighborhoods. Yet, there is less evidence on the competitiveness of inner cities for employment. We document the trends in net employment growth and find that inner cities gained over 1.8 million jobs between 2002 and 2011 at a rate comparable to suburban areas. We also find a significant number of inner cities are competitive over this period — increasing their share of metropolitan employment in 120 out of 281 MSAs. We also describe the pattern of job growth within the inner city, finding that tracts that grew faster tended to be closer to downtown, with access to transit, and adjacent to areas with higher population growth. However, tracts with higher poverty rates experienced less job growth, indicating that barriers still exist in the inner city.

2-06-2014 Chicago uses tax increment financing (TIF) to promote economic development to a greater extent than any other large American city. This paper conducts a comprehensive assessment of the effectiveness of Chicago’s TIF programme in creating economic opportunities and catalysing real estate investments at the neighbourhood scale. This paper uses a unique panel dataset at the block-group level to analyse the impact of TIF designation and investments on employment change, business creation and building permit activity. After controlling for potential selection bias in TIF assignment, this paper shows that TIF ultimately fails the ‘but-for’ test and shows no evidence of increasing tangible economic development benefits for local residents. Implications for policy are considered.

The resilient regional labour market? The US case

1/27/2010 This article examines the ability of regional labour markets to rebound by growing the middle class or increasing wages. Using data on US metros, we identify regions that are transformative in terms of achieving a new equilibrium or reversing their path dependency. We then use discriminant analysis to identify the factors behind this resiliency. Regional resilience is rare, and changing a region’s path is easier than achieving a new equilibrium. Among the most important factors behind regional transformation are the ability to attract immigrants, retain manufacturing, and innovate a high-tech economy. The diversity of out- comes suggests that a simple strong versus weak market dichotomy is insufficient to char- acterize regional resiliency, and a wide array of policies will be necessary.