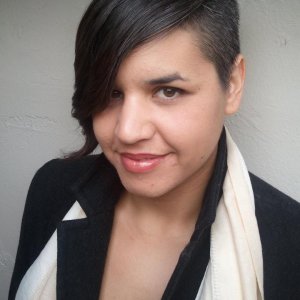 Cuban-American writer & filmmaker Vanessa Libertad Garcia grew up between the burbs’ and hoods of Los Angeles, California. A graduate of Loyola Marymount University, she’s completed a myriad of successful projects in both the film and literary worlds. On a cinematic front, she’s worked on films that garnered the HSF/McNamara Arts Grant, debuted on PBS’ Independent Lens, and screened at top festivals such as The LA Film Fest, The Habana Film Fest, and Outfest. She’s had writings published by venerated literary staple "Lambda Literary" and the underground art & lit magazine "This Great Society." Her first book "The Voting Booth After Dark: Despicable, Embarrassing, Repulsive" is drawing laudable reviews from a variety of sources including "The San Francisco Examiner", "The Midwest Book Review" and "Blogcritics". It's purchasable as an e-book and paperback on Amazon.com, Barnes&Noble.com and many other bookstores such as GiovannisRoom.com. She is currently in development for her first feature film titled "Dear Dios", which is based on the books’ characters and her second book "Bloody Fucking Hell", a collection of love poetry. Ms. Garcia also consults on films in development and post-production stages, and serves as a speaker on issues pertaining to the GLBTQ, Latino and Alcoholic communities.

Latinos Within the Glbtq Community

Writing a collection of poetry & essays. In Development “The B Job” Poem featured in The Lambda Literary: Sept 10’

2003 - 2004 An intensive ten-month program in Duesseldorf, Germany that immersed students in all aspects of filmmaking such as producing, shooting, directing, editing, lighting, and sound.