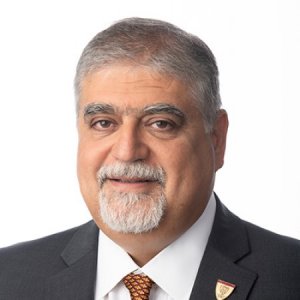 
An expert in pathophysiology and treatment of diseases related to altered steroid hormone synthesis. 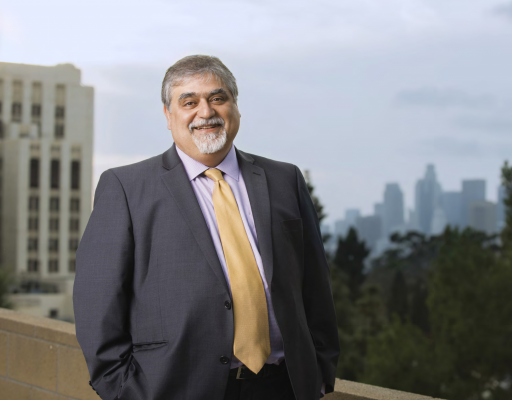 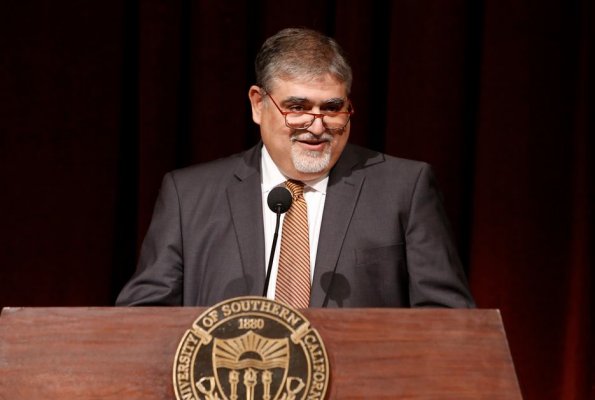 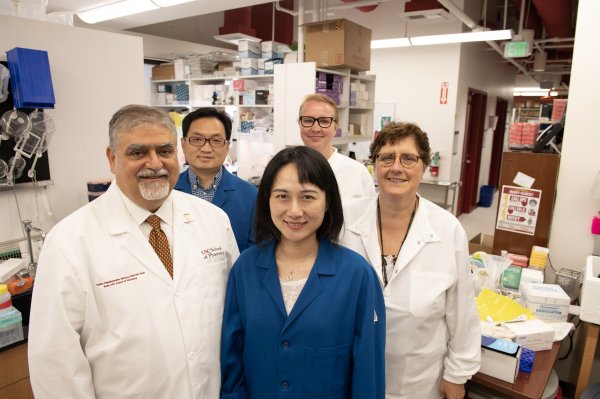 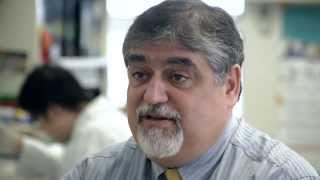 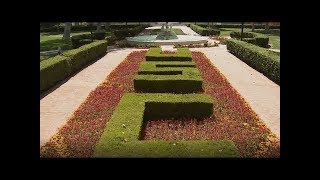 Vassilios Papadopoulos, DPharm, PhD, DSc (hon), was named dean of the USC School of Pharmacy in fall 2016. Before joining USC, he served as executive director and chief scientific officer of the Research Institute of McGill University Health Centre in Montreal, and as faculty, department chair and director of the Biomedical Graduate Research Organization at Georgetown University Medical Centre.

A noted scientist and innovative leader, Papadopoulos has published more than 350 papers, holds numerous patents, serves on many national and international advisory committees and boards of biotechnology companies as well as a consultant for the pharmaceutical industry. He is an elected foreign member of the National Academies of Medicine and Pharmacy in France, fellow of the American Association for the Advancement of Science, Fellow of the American Association of Pharmaceutical Scientists, and fellow of the Canadian Academy of Health Sciences.

Papadopoulos’ research focuses on understanding the cellular and molecular mechanisms responsible for the initiation and maintenance of steroid biosynthesis in the adrenal, gonads and brain, in health and disease. He also examines the regulation of steroid biosynthesis, intracellular compartmentalization and homeostasis by hormones, chemicals, drugs, natural products and environmental factors. His research has direct applications in reproduction and development, aging, cancer, and neurological and neuropsychiatric disorders.

The Chair was awarded in recognition of Dr. Papadopoulos’ contributions to science and MUHC and McGill University (2010-2017)

The Chair was awarded for research in the discipline of Drugs- Pharmaceutical Science, Chemistry, and non-medical use of drugs (2007-2017)

Vassilios Papadopoulos, executive director and chief scientific officer of the Research Institute of McGill University Health Centre in Montreal, has been named dean of the USC School of Pharmacy, effective Oct. 1.

Q & A with Dean Papadopoulos

Dean Vassilios Papadopoulos brings wide-ranging expertise, a track record of leadership, and a passion for innovation to his new role at the USC School of Pharmacy.

Renowned Scientist Takes the Helm at USC School of Pharmacy

An internationally acclaimed researcher works to advance the future of health care delivery.

Papadopoulos’ research focuses on understanding the cellular and molecular mechanisms responsible for the initiation and maintenance of steroid biosynthesis in the adrenal, gonads and brain, in health and disease. He also examines the regulation of steroid biosynthesis, intracellular compartmentalization and homeostasis by hormones, chemicals, drugs, natural products and environmental factors. His research has direct applications in reproduction and development, aging, cancer, and neurological and neuropsychiatric disorders.

Translocator protein (TSPO) is a high-affinity cholesterol- and drug-binding mitochondrial protein. Nuclear receptor subfamily 5 group A member 1 or steroidogenic factor 1 (Nr5a1)-Cre mice were previously used to generate steroidogenic cell-specific Tspo gene conditional knockout (cKO) mice. TSPO-depleted homozygotes showed no response to adrenocorticotropic hormone (ACTH) in stimulating adrenal cortex corticosterone production but showed increased epinephrine synthesis in the medulla. No other phenotype was observed under normal growth conditions. During these studies, we noted that pairing two cKO mice resulted in the generation of small pups. These pups showed low growth rate at weaning, which has been linked to the development of type 2 diabetes (T2D) in adulthood.

2019 Mono-(2-ethylhexyl) phthalate (MEHP), the active metabolite of di-(2-ethylhexyl) phthalate (DEHP), is a plasticizer with endocrine disruptor activity that has been shown to stimulate basal steroid biosynthesis in Leydig cells. The mechanism by which it does so is unknown. Using MA-10 mouse tumor Leydig cells, we assessed the effects of MEHP on reactive oxygen species (ROS) levels, and on the signal transduction pathways that mobilize cholesterol. Exposure to 0–300 μM MEHP stimulated basal progesterone production in a dose-dependent manner. Progesterone stimulation was correlated with increases in the phosphorylation of hormone-sensitive lipase (HSL; aka cholesteryl ester hydrolase), which is involved in the production of free cholesterol, and of steroidogenic acute regulatory (STAR) protein expression.

2019 The optimization of translocator protein (TSPO) ligands for Positron Emission Tomography as well as for the modulation of neurosteroids is a critical necessity for the development of TSPO-based diagnostics and therapeutics of neuropsychiatrics and neurodegenerative disorders. Structural hints on the interaction site and ligand binding mechanism are essential for the development of efficient TSPO ligands. Recently published atomic structures of recombinant mammalian and bacterial TSPO1, bound with either the high-affinity drug ligand PK 11195 or protoporphyrin IX, have revealed the membrane protein topology and the ligand binding pocket. The ligand is surrounded by amino acids from the five transmembrane helices as well as the cytosolic loops. However, the precise mechanism of ligand binding remains unknown. Previous biochemical studies had suggested that ligand selectivity and binding was governed by these loops. We performed site-directed mutagenesis to further test this hypothesis and measured the binding affinities.

Insight into the Structural Features of TSPO: Implications for Drug Development

The translocator protein (TSPO), an 18-kDa transmembrane protein primarily found in the outer mitochondrial membrane, is evolutionarily conserved and widely distributed across species. In mammals, TSPO has been described as a key member of a multiprotein complex involved in many putative functions and, over the years, several classes of ligand have been developed to modulate these functions. In this review, we consider the currently available atomic structures of mouse and bacterial TSPO and propose a rationale for the development of new ligands for the protein. We provide a review of TSPO monomeric and oligomeric states and their conformational flexibility, together with ligand-binding site and interaction mechanisms. These data are expected to help considerably the development of high-affinity ligands for TSPO-based therapies or diagnostics.

Disruption of ergosterol and tryptophan biosynthesis, as well as cell wall integrity pathway and the intracellular pH homeostasis, lead to mono-(2-ethylhexyl)-phthalate …

2018 Endocrine disrupting chemicals (EDCs) are substances in the environment, food, and consumer products that interfere with hormone homeostasis, metabolism or reproduction in humans and animals. One such EDC, the plasticizer di-(2-ethylhexyl)-phthalate (DEHP), exerts its function through its principal bioactive metabolite, mono-(2-ethylhexyl)-phthalate (MEHP). To fully understand the effects of MEHP on cellular processes and metabolism as well as to assess the impact of genetic alteration on the susceptibility to MEHP-induced toxicity, we screened MEHP-sensitive mutations on a genome-scale in the eukaryotic model organism Saccharomyces cerevisiae. We identified a total of 96 chemical-genetic interactions between MEHP and gene mutations in this study.

Reduced serum testosterone (T), or hypogonadism, affects millions of men and is associated with many pathologies, including infertility, cardiovascular diseases, metabolic syndrome, and decreased libido and sexual function. Administering T-replacement therapy (TRT) reverses many of the symptoms associated with low T levels. However, TRT is linked to side effects such as infertility and increased risk of prostate cancer and cardiovascular diseases. Thus, there is a need to obtain T-producing cells that could be used to treat hypogonadism via transplantation and reestablishment of T-producing cell lineages in the body. T is synthesized by Leydig cells (LCs), proposed to derive from mesenchymal cells of mesonephric origin. Although mesenchymal cells have been successfully induced into LCs, the limited source and possible trauma to donors hinders their application to clinical therapies. Alternatively, human induced pluripotent stem cells (hiPSCs), which are expandable in culture and have the potential to differentiate into all somatic cell types, have become the emerging source of autologous cell therapies. We have successfully induced the differentiation of hiPSCs into either human Leydig-like (hLLCs) or adrenal-like cells (hALCs) using chemically defined culture conditions. Factors critical for the development of LCs were added to both culture systems. hLLCs expressed all steroidogenic genes and proteins important for T biosynthesis, synthesized T rather than cortisol, secreted steroid hormones in response to dibutyryl-cAMP and 22(R)-hydroxycholesterol, and displayed ultrastructural features resembling LCs. By contrast, hALCs synthesized cortisol rather than T. The success in generating hiPSC-derived hLLCs with broad human LC (hLC) features supports the potential for hiPSC-based hLC regeneration.