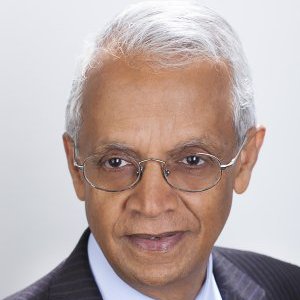 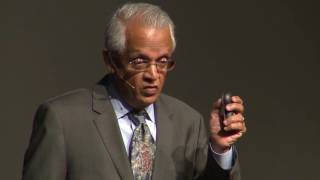 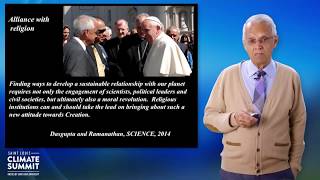 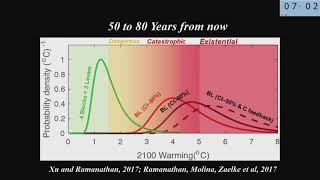 Ramanathan discovered the greenhouse effect of CFCs (chlorofluorocarbons; belongs to family of halocarbons) in 1975 and showed that a ton each of CFC-11 and CFC-12 has more global warming effect than 10,000 tons of CO2. This discovery established the now-accepted fact that non-CO2 gases are a major contributor to planet warming and also enabled the Montreal Protocol to become the first successful climate mitigation policy. For this work, he was awarded the Tyler Prize by Nobel Laureate Sherwood Rowland in 2009. In 1980, Ramanathan and colleague Roland Madden were the first to make a statistical prediction that global warming will be detected above the background noise by 2000, a prediction which was verified by the Intergovernmental Panel on Climate Change in 2001. Ramanathan led international field campaigns and developed unmanned aircraft platforms for tracking brown cloud pollution worldwide. His work has led to numerous policies to curb this major contributor to the atmosphere’s greenhouse warming such as the formation of the Climate and Clean Air Coalition by the United Nations.

Ramanathan founded, designed, and leads Project Surya along with daughters Nithya Ramanathan and Tara Ramanathan. Project Surya is an extended effort to characterize and mitigate the climate and health impacts of cooking with solid biomass as a way to slow the pace of climate change protect the three billion from climate change. He is now leading development of a University of California climate solutions course that is expected to reach a million students or more in California and beyond.

Ramanathan was honored as the science advisor to Pope Francis’ holy see delegation to the historic 2015 Paris climate summit and in addition advises California Governor Jerry Brown. He was named a UN Climate Champion in 2013; has been elected to the US National Academy and the Royal Swedish Academy which awards the Nobel prizes. Foreign Policy named him a thought leader in 2014; In 2018, he (with James Hansen) was named the Tang Laureate for sustainability science.

Jerry Brown Made Climate Change His Issue. Now, He’s Not Sure How Much Politicians Can Do.

Not just American politics. Veerabhadran Ramanathan, a climate scientist at the Scripps Institution of Oceanography, said Governor Brown’s doubts stemmed in part from talking to leaders abroad and realizing how far their policies are from making a difference. “He is pretty pessimistic. He sees these leaders. He talks with them,” said Dr. Ramanathan, who worked with Governor Brown on a state law to ban short-lived pollutants like methane. “He can see the cliff we are all rushing toward.”

The Tang Prize Foundation cited Ramanathan “for making seminal contributions to our fundamental understanding of climate change and impacts of air pollution, and taking direct action to advocate and facilitate effective mitigation policies.” Ramanathan said that his being of Asian descent made the award especially meaningful. “This major recognition from east Asia is of huge significance for me and I am deeply honored,” said Ramanathan, who was born in the Indian city of Chennai (then known as Madras) in 1944 and immigrated to the United States in 1970. In 1975, Ramanathan discovered that chlorofluorocarbons (CFCs), gases then solely associated with the destruction of the ozone layer, were also powerful drivers of the greenhouse effect, and, as such, contributed to climate change.

Pope's Climate Expert Tells Nebraska Audience: It's An Issue In The Laps Of Faith Leaders

Kelly: So where does the science and the spirituality intersect with this issue? Ramanathan: This being my mantra, the thing I'm pushing last five years, more so after my interaction with Pope Francis, is that in the context of climate change we have reached an important fork on the road. Which is, if you ignore the science and go one way, my own science tells me I foresee destruction. Suffering on mass scales. Now we are talking about three quarters of the planet getting impacted if you let these pollutant emissions go unchecked for the next 30 years. So where does spirituality fit in? Because of our inaction to stop this climate change, it has become a huge moral, ethical issue. Three billion (people) who have nothing to do with this (the cause of climate change) are going to suffer the worse consequences. The change, which is already happening, is going to get worse. They're irreversible on our time scales. Once you have the sea level rise 10, 15 feet, it's not going to go back for another several thousand years. So generations of our children, grandchildren, and their children, they're going to suffer the worse impacts of our actions. It's the huge equity issue, which puts it right in the laps of faith leaders.

Air Pollution, Climate Change, and Health: A Declaration from the Vatican

Annals of the American Thoracic Society

2018 Climate change, labeled as “the greatest global public health threat of the 21st century” by the Lancet Commission on Climate Change, was the focus of a November 2017 workshop organized by the Pontifical Academy of Sciences (1, 2). The workshop organizers, empowered by the Papal sponsorship, convened a notably interdisciplinary group of government officials, religious leaders, public health researchers, economists, and climate change scientists. The workshop was unique for its intersectoral participants from many nations, solution-oriented discussions, and emphasis on rapid action. A declaration resulted, entitled Declaration of Health of People, Health of Planet, and Our Responsibility: Climate Change, Air Pollution and Health Workshop (3).

Health, Faith, and Science on a Warming Planet

2018 Global change presents humanity with unprecedented challenges. Climate change, altered natural cycles, and pollution of air, water, and biota threaten the very conditions on which human civilization has depended for the last 12 000 years. While human health is better now than ever before in human history, climate change is undermining many public health advances of the last century and ultimately may be associated with the unprecedented extinction of species. The increasing gap between the wealthy and poor—already unconscionable, and the cause of profound preventable morbidity and mortality—amplifies the effects of climate change on health and deepens health disparities.

2017 The historic Paris Agreement calls for limiting global temperature rise to “well below 2 C.” Because of uncertainties in emission scenarios, climate, and carbon cycle feedback, we interpret the Paris Agreement in terms of three climate risk categories and bring in considerations of low-probability (5%) high-impact (LPHI) warming in addition to the central (∼ 50% probability) value. The current risk category of dangerous warming is extended to more categories, which are defined by us here as follows:> 1.5 C as dangerous;> 3 C as catastrophic; and> 5 C as unknown, implying beyond catastrophic, including existential threats. With unchecked emissions, the central warming can reach the dangerous level within three decades, with the LPHI warming becoming catastrophic by 2050.

2017 The Paris Climate Agreement under the United Nations Framework Convention on Climate Change (UNFCCC) explicitly links the world's long-term climate and near-term sustainable development and poverty eradication agendas. Urgent action is needed, but there are many paths toward the agreement's long-term, end-of-century, 1.5 to 2 C climate target. We propose that reducing short-lived climate pollutants (SLCPs) enough to slow projected global warming by 0.5 C over the next 25 years be adopted as a near-term goal, with many potential benefits toward achieving Sustainable Development Goals (SDGs). As countries' climate commitments are formally adopted under the agreement and they prepare for its 2018 stocktaking, there is a need for them to pledge and report progress toward reductions not just in CO 2 but in the full range of greenhouse gases (GHGs) and black carbon (BC) (plus co-emissions) in order to track progress toward long-term goals.

2016 Three billion of the world’s poorest people mostly rely on solid biomass for cooking, with major consequences to health 1 and environment 2. We demonstrate the untapped potential of wireless sensors connected to the ‘internet of things’ to make clean energy solutions affordable for those at the bottom of the energy pyramid. This breakthrough approach is demonstrated by a 17-month field study with 4,038 households in India. Major findings include: self-reported data on cooking duration have little correlation with actual usage data from sensors; sensor data revealed that the distribution of high and low users varied over time, and the actual mitigation of climate pollution was only 25% of the projected mitigation; climate credits were shown to significantly incentivize the use of cleaner technologies.