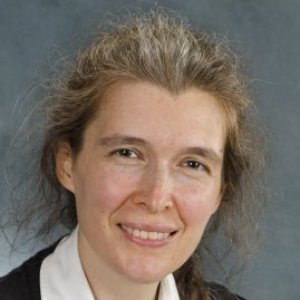 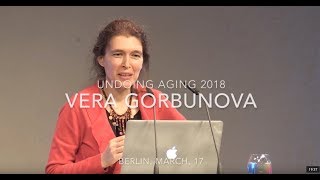 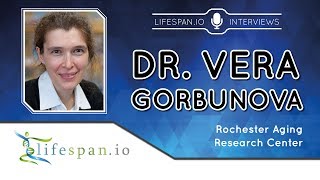 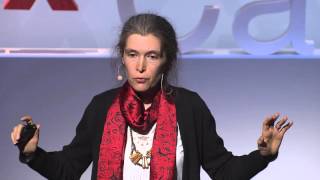 Gorbunova’s research interests include cancer, genomic instability, and the mechanisms and comparative biology of aging. She is the co-director of the Rochester Aging Research Center, where she co-directs the Gorbunova and Seluanov laboratory, and she has recently been studying the mechanisms of longevity and genomic stability in exceptionally long-lived mammals, with a particular focus on the naked mole rat and the blind mole rat, both of which are known for their resistance to cancer and virtually all age-related ailments. She found that a key factor in the cancer resistance of naked mole rats is high molecular-weight hyaluronan, a molecule that is present in humans as well, although in a different form, and is used in the treatment of certain age-related conditions, such as arthritis.
Gorbunova is the recipient of several awards, including from the National Institutes of Health and the American Federation for Aging Research among many others, and she sits on the editorial boards of Frontiers in Genetics, Genetics of Aging, Aging, Pathobiology of Aging and Age-Related Diseases, Aging Cell, and Oncotarget: Gerotarget.

Can Blood from Young People Slow Aging? Silicon Valley Has Bet Billions It Will

Vera Gorbunova at University of Rochester has done some of her most exciting work on an obscure superstar in the longevity field, the naked mole rat.

Researchers at the University of Rochester have uncovered more evidence that the key to longevity resides instead in a gene, a Rael-Science post says. Explorers for centuries have however, dreamt of a Fountain of Youth, with healing waters that rejuvenate the old and extend life indefinitely. In a new paper published in the journal Cell, the researchers—including Vera Gorbunova and Andrei Seluanov, professors of biology; Dirk Bohmann, professor of biomedical genetics; and their team of students and postdoctoral researchers—found that the gene sirtuin 6 (SIRT6) is responsible for more efficient DNA repair in species with longer lifespans.

Scientists studying longevity believe a gene could explain why some animals live longer. In 18 species of rodents with varying life spans, researchers looked at sirtuin 6 (SIRT6), a gene that plays a role in bodily processes such as aging, cellular stress resistance and DNA repair. Vera Gorbunova, a professor of Biology at the University of Rochester, explained in a statement that the team pinpointed five amino acids that appear to make the SIRT6 protein stronger and "more active in repairing DNA and better at enzyme functions."

A team from the from the University of Rochester, including Vera Gorbunova, PhD, and Andrei Seluanov, PhD, demonstrated that LINE1 retrotransposons become more active with age and may cause age-related diseases by triggering inflammation. By understanding the impacts of retrotransposons, researchers can better recognize the processes by which cells age and how to combat the deleterious effects of aging, according to Gorbunova and Seluanov.

Cancer was responsible for an estimated 9.6 million deaths in 2018. Finding new ways to combat it is an important endeavour. Scientists are making advances through a variety of research methods; here, five individuals share how they’ve built careers in cancer research while taking innovative approaches to this problem. VERA GORBUNOVA: Stay open-minded Comparative biologist at the University of Rochester in New York. The naked mole rat (Heterocephalus glaber) is a remarkable creature in more ways than one. With its large, goofy incisors and waves of pale pink wrinkles, it is unlikely to win any beauty pageants. But the naked mole rat does have some things going for it. It can live for more than 30 years. And it almost never gets cancer.

Elephants rarely get cancer. Here's why this matters to humans

Experts say there are many steps before findings like Lynch's are tested or used toward human cancer therapies. One of those steps could involve inserting elephant genes into lab mice, which do not have the same resistance to cancer, according to Vera Gorbunova, a professor of biology at the University of Rochester and co-director of the Rochester Aging Research Center. She was not involved in the new study.

Why is cancer so rare in elephants? They might thank their 'zombie gene'

In addition to having great memories, elephants are known for having a very low incidence of cancer. In what might seem a wild mash-up of the SyFi channel and National Geographic, new research has uncovered a surprising factor that protects elephants against the dreaded disease: a gene that had gone dormant in their mammalian ancestors, but got turned back on as their evolving bodies grew ever bigger. Scientists call it a “zombie gene” — cue the chilling music here — “a reanimated pseudogene that kills cells when expressed.” Along with elephants, several kinds of whales as well as bats and the naked mole rat share enviably minuscule rates of cancer. Biologists suspect that each of those species has evolved a different strategy to ward off malignancies, and they want to understand them all. In time, they might find ways to approximate those strategies in humans and drive down our vulnerability to cancer. “That's not easy,” said Vincent J. Lynch, who led the research published this week in the journal Cell Reports. “It's a fascinating study,” said molecular and cell biologist Vera Gorbunova of the University of Rochester in New York, who has studied the mechanisms by which naked mole rats thwart cancerous cells. The collective research of Lynch's group “also raises intriguing questions,” said Gorbunova, who was not involved in the new work.

What Naked Mole Rats Tell Us About Cancer and Longevity

When scientist Vera Gorbunova began studying longevity and DNA repair almost two decades ago, she noticed that most research in the field was being done on short-lived organisms, ranging from yeast and worms up to mice. However, she wanted to understand the biological mechanisms that enabled longer-living species, such as naked mole rats, to live cancer-free for up to 30 years — 10 times longer than mice.

Key to the cure cancer-resistant animals may offer clues into treatment, prevention

Elephants have 100 times as many cells as humans. But they seldom get cancer. This is surprising, because cancer is a result of cell division gone wrong, and the more cells an organism has, the higher the chances that some will mutate into tumours. Also, because elephants live so long — between 60 and 70 years — their cells have more opportunities to mutate.

We can learn a lot from the naked mole rat. By defying the biological laws of aging, these hardy little rodents can live into their 30s, they're all but immune to cancer, and they can go without oxygen for extended periods by mimicking plants. Researchers at the University of Rochester had a theory on how they manage to live such long lives: perhaps their cells didn't undergo the process of senescence. But when they looked at the cells of naked mole rats, they found the story is much stranger. Cancer is essentially just a collection of unruly cells that keep dividing out of control. To keep them in check, humans and other organisms have evolved a defense mechanism known as cellular senescence, which stops damaged cells from dividing any further. But the flipside is that as these inactive, senescent cells build up in the body, they contribute to the physical deterioration we see as products of aging. "In humans, as in mice, aging and cancer have competing interests," says Vera Gorbunova, co-author of the new study. "In order to prevent cancer, you need to stop cells from dividing. However, to prevent aging, you want to keep cells dividing in order to replenish tissues."

Retrotransposable elements are deleterious at many levels, and the failure of host surveillance systems for these elements can thus have negative consequences. However, the contribution of retrotransposon activity to ageing and age-associated diseases is not known. Here we show that during cellular senescence, L1 (also known as LINE-1) retrotransposable elements become transcriptionally derepressed and activate a type-I interferon (IFN-I) response. The IFN-I response is a phenotype of late senescence and contributes to the maintenance of the senescence-associated secretory phenotype. The IFN-I response is triggered by cytoplasmic L1 cDNA, and is antagonized by inhibitors of the L1 reverse transcriptase. Treatment of aged mice with the nucleoside reverse transcriptase inhibitor lamivudine downregulated IFN-I activation and age-associated inflammation (inflammaging) in several tissues. We propose that the activation of retrotransposons is an important component of sterile inflammation that is a hallmark of ageing, and that L1 reverse transcriptase is a relevant target for the treatment of age-associated disorders.

Evolution of telomere maintenance and tumour suppressor mechanisms across mammals

Mammalian species differ dramatically in telomere biology. Species larger than 5–10 kg repress somatic telomerase activity and have shorter telomeres, leading to replicative senescence. It has been proposed that evolution of replicative senescence in large-bodied species is an anti-tumour mechanism counteracting increased risk of cancer due to increased cell numbers. By contrast, small-bodied species express high telomerase activity and have longer telomeres. To counteract cancer risk due to longer lifespan, long-lived small-bodied species evolved additional telomere-independent tumour suppressor mechanisms. Here, we tested the connection between telomere biology and tumorigenesis by analysing the propensity of fibroblasts from 18 rodent species to form tumours. We found a negative correlation between species lifespan and anchorage-independent growth. Small-bodied species required inactivation of Rb and/or p53 and expression of oncogenic H-Ras to form tumours. Large-bodied species displayed a continuum of phenotypes requiring additional genetic ‘hits’ for malignant transformation. Based on these data we refine the model of the evolution of tumour suppressor mechanisms and telomeres. We propose that two different strategies evolved in small and large species because small-bodied species cannot tolerate small tumours that form prior to activation of the telomere barrier, and must instead use telomere-independent strategies that act earlier, at the hyperplasia stage.