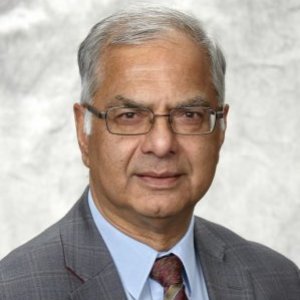 Harnessing the power of electricity and storing it for future use is one of the 21st century’s greatest energy challenges. A lead developer of the smart grid power system components, Vijay Sood, PhD, is an Associate Professor in the Department of Electrical, Computer and Software Engineering in the Faculty of Engineering and Applied Science, and a Natural Sciences and Engineering Research Council of Canada (NSERC)-Ontario Power Generation (OPG) Co-Chair in Innovative Design Engineering. In this role, he is responsible for elevating the design engineering level of UOIT’s Electrical Engineering students’ in their final year Capstone Projects. While all eyes are on the evolution of smart grid technology, Dr. Sood’s research agenda focuses on the integration of renewable energy and automation into an advanced smart grid power system which will have implications for the batteries of electric vehicles and other energy storage devices.

He has been transforming the global electrical power landscape for nearly 40 years. In 1976, he joined IREQ, Hydro Québec, where he spearheaded the development of high-voltage direct current (HVDC) transmission systems. The earliest three-terminal, 2000 megawatt (MW) link was capable of sending power from James Bay, Québec to Boston, Massachusetts, making it the world’s longest and most powerful HVDC transmission line. Since then he has authored two books based on HVDC technology which have served as a pinnacle moment in his esteemed career. During his last 13 years in industry, he concurrently served as a professor of Electrical and Computer Engineering at Concordia University in Montréal before joining UOIT in 2007. For his key contributions, Dr. Sood has been appointed a Fellow of the Engineering Institute of Canada, the Institute of Electrical and Electronic Engineers and the Canadian Academy of Engineers. He is also a registered professional engineer in Ontario.

Born in India and raised in Kenya, Dr. Sood’s keen interest in high power applications stems from his appreciation for the value of electricity in creating jobs and contributing to societal growth. He obtained his Bachelor of Science in Electrical Engineering from Nairobi University in Kenya in 1967, earned his Master of Science in Electrical Engineering from Strathclyde University in Scotland in 1969, and received his Doctorate in Power Electronics from Bradford University in England in 1977.

Dr. Sood has been recognized as a Fellow of the CAE for his significant developments in the modelling and simulation of High Voltage DC Transmission technology in Canada and internationally.

Dr. Sood received the distinction of IEEE Fellow for his extraordinary accomplishments in IEEE fields of interest including his work in HVDC transmission systems. Throughout his career, Dr. Sood has received numerous IEEE awards including the IEEE Third Millennium Medal in 2000, an IEEE Outstanding Service Award in 1998, and IEEE Regional Activities Board Achievement Awards in 2001 and 2006.

Thanks to ongoing research partnerships with the Natural Sciences and Engineering Research Council of Canada (NSERC), Ontario Power Generation (OPG) and the University Network of Excellence in Nuclear Engineering (UNENE), the University of Ontario Institute of Technology (UOIT) is proudly celebrating two of its NSERC Chair programs.

As a co-investigator of this five-year research program, Dr. Sood's research involves the integration of renewable energy into a new smart grid power system using advanced technology to transform its associated controls, automation and communication components. Dr. Sood is exploring the evolution of the urban grid.

Panasonic Eco Solutions Canada, Inc. is leading a $3.8-million research project to establish Ontario's first independent Microgrid Research and Innovation Park at UOIT in partnership with General Electric Digital Energy. Additional collaborators include Oshawa Power Utilities Corporation and Hydro One. As an Evacuation Centre, UOIT is an ideal development site for an islanded microgrid. The microgrid aims to provide backup power support to critical loads in UOIT's Evacuation Centre; demonstrate commercialization of the smart microgrid concept as an emergency power source for hospitals, military bases, and key industries; and provide a test facility for smart microgrid development and innovative research for UOIT professors, students and associated industries to improve performance and reduce costs of microgrid systems. The project supports the Ministry of Energy's current mandate and completion is expected in August 2016.

Capstone Systems Design for Mechanical, Automotive, and Manufacturing Engineering I

A new technique for blocking the operation of the transformer differential relay when subjected to magnetizing inrush current is presented in this paper. The relay differential and restraint currents are calculated first, and the fundamental-frequency components of the two currents are then compared to identify the phase angle difference (PAD) between the corresponding transformer primary and secondary currents.

High-voltage direct-current (HVDC) systems play an important role in modern energy grids, whereas efficient and accurate models are often needed for system-level studies. Due to the inherent switching in HVDC converters, the detailed switch-level models are computationally expensive for the simulation of large-signal transients and hard to linearize for small-signal frequency-domain characterization. In this paper, a dynamic average-value model (AVM) of the first CIGRE HVDC benchmark system is developed in a state-variable-based simulator, such as Matlab/Simulink, and nodal-analysis-based electromagnetic transient program (EMTP), such as PSCAD/EMTDC.

This paper presents an average-value model of a line-commutated converter-based HVDC system using dynamic phasors. The model represents the low-frequency dynamics of the converter and its ac and dc systems, and has lower computational requirements than a conventional electromagnetic-transient (EMT) switching model.

In this paper, the effects of topological variations of the ac-side filters on the system performance are investigated. Also, the steady-state and dynamic impedances predicted by the average models under balanced and unbalanced operation are compared. The studies and analyses presented here extend and complement those set forth in the preceding companion publication.

This paper develops and compares different types of models for efficient and accurate representation of MMC-HVDC systems. The results show that the use of a specific type of model will depend on the conducted analysis and required accuracy.