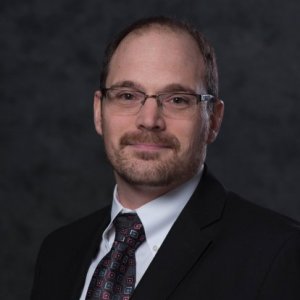 Vincent Meunier is the Head of the Physics, Applied Physics, and Astronomy Department at Rensselaer Polytechnic Institute where he holds the Gail and Jeffrey L. Kodosky ’70 Constellation Chair. Meunier earned a PhD from the University of Namur in Belgium in 1999 under the supervision of Professor Philippe Lambin. He was a Senior R&D staff member at Oak Ridge National Laboratory until 2010 when he joined Rensselaer as an Associate Professor. He became Full Professor in 2015, shortly before being appointed as Head of Department.

Meunier leads the Innovative Computational Material Physics (ICMP) group at Rensselaer. His research uses computation to examine the atom-level details of materials, using quantum mechanical techniques. He is particularly interested in fundamental properties of low-dimensional materials and domains where he can collaboratively work with engineers and experimentalists to optimize these materials, starting at the atomic level and targeting functionality. His h-index, as 07/2019, is 67. He has published approximately 300 papers in peer-reviewed journals and is a Fellow of the American Physical Society and of the Institute of Physics. Clarivate recognized him among the top 1% highly cited researcher worldwide for material science field in Fall 2018.

Namur University: MS, Chemistry and Physics at the Mesoscale 1998

The team, including Vincent Meunier, head of the Department of Physics, Applied Physics, and Astronomy, and others, determined that lithium insertion caused an asymmetry in the spacing between vanadium atoms, known as Peierls distortion, which was responsible for the breakup of the VS2 flakes...

Passionate about physics and computational methods, Professor and Head of the Physics, Applied Physics, and Astronomy Department Vincent Meunier works to optimize materials at their lowest level, playing with atomic structure to maximize their electronic properties on a quantum scale...

Initially intrigued by GOFs' tunable electronic properties, Sumpter and RPI's Vincent Meunier soon realized the material could be used as a desalination membrane...

Modeling the Kondo effect of a magnetic atom adsorbed on graphene

2019 The Kondo effect due to a magnetic atom adsorbed on graphene is investigated using two theoretical approaches, including the non-equilibrium Green's function method within the slave-boson mean-field approximation and a newly developed tight-binding (TB) model with an effectively infinite Hubbard U term. Both methods reveal the presence of a Kondo peak in the local density of state (LDOS) of graphene near the Fermi level.

2018 Boundaries between distinct topological phases of matter support robust, yet exotic quantum states such as spin–momentum locked transport channels or Majorana fermions. The idea of using such states in spintronic devices or as qubits in quantum information technology is a strong driver of current research in condensed matter physics. The topological properties of quantum states have helped to explain the conductivity of doped trans-polyacetylene in terms of dispersionless soliton states.

2017 Ever since the isolation of single-layer graphene in 2004, two-dimensional layered structures have been among the most extensively studied classes of materials. To date, the pool of two-dimensional materials (2DMs) continues to grow at an accelerated pace and already covers an extensive range of fascinating and technologically relevant properties.

2017 The bottom-up approach to synthesize graphene nanoribbons strives not only to introduce a band gap into the electronic structure of graphene but also to accurately tune its value by designing both the width and edge structure of the ribbons with atomic precision. We report the synthesis of an armchair graphene nanoribbon with a width of nine carbon atoms on Au(111) through surface-assisted aryl–aryl coupling and subsequent cyclodehydrogenation of a properly chosen molecular precursor.

2016 The last two decades have witnessed a tremendous growth in the development and understanding of sp2 carbon-based nanostructures. The impact of this research has led to a number of fundamental discoveries that have played a central role in the understanding of many aspects of materials physics and their applications. Much of this progress has been enabled by the development of new techniques to prepare, modify, and assemble low-dimensional materials into devices.

2016 Black phosphorus (BP) is a highly anisotropic allotrope of phosphorus with great promise for fast functional electronics and optoelectronics. We demonstrate the controlled structural modification of few-layer BP along arbitrary crystal directions with sub-nanometer precision for the formation of few-nanometer-wide armchair and zigzag BP nanoribbons. Nanoribbons are fabricated, along with nanopores and nanogaps, using a combination of mechanical–liquid exfoliation and in situ transmission electron microscopy (TEM) and scanning TEM nanosculpting.