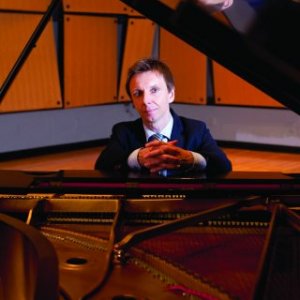 Wojciech Kocyan was praised for his "highly distinctive performances (…) superb, intelligent artistry (…)" (ClassicsToday.com) and "incisive temperament, impeccable technique and sumptuous tone" (Le Monde de la Musique.). He was born in Poland. He studied with two of the world's most esteemed piano pedagogues: Andrzej Jasinski in Poland, where he received his Masters Degree and with John Perry at the University of Southern California, where he received a Doctor of Musical Arts Degree.

In September 2007 the Gramophone magazine, published in London and considered the world's most prestigious classical music journal, chose Mr. Kocyan's recording of Prokofiev, Scriabin and Rachmaninoff as one of 50 best classical recordings ever made, alongside recordings of such luminaries as Leonard Bernstein, Dietrich Fisher-Dieskau, Nicolaus Harnoncourt and Arthur Rubinstein. It also featured the cover headline "The genius of Wojciech Kocyan". His latest CD, of music by Robert Schumann was released in June 2012.

Dr. Kocyan is much in demand as an adjudicator and lecturer. He has been invited to give master classes in France, Hungary, Austria, Poland, Mexico and the United States, including such prestigious venues as the Colburn School. He is the Artistic Director of the Paderewski Music Society in Los Angeles and the Artistic Director of the American Paderewski Piano Competition in Los Angeles.