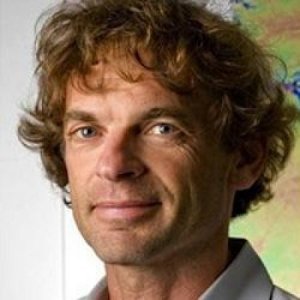 
Dr. Rignot works to understand the interactions of glaciers and climate and what effects they will have on global sea levels. 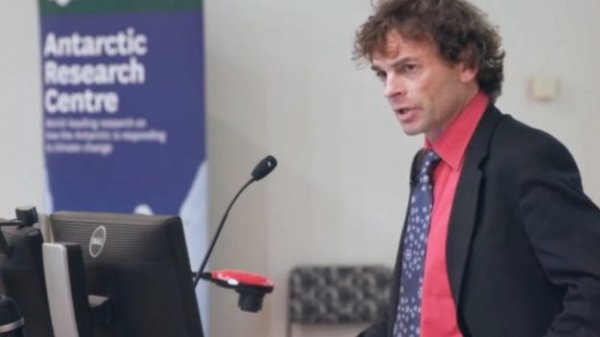 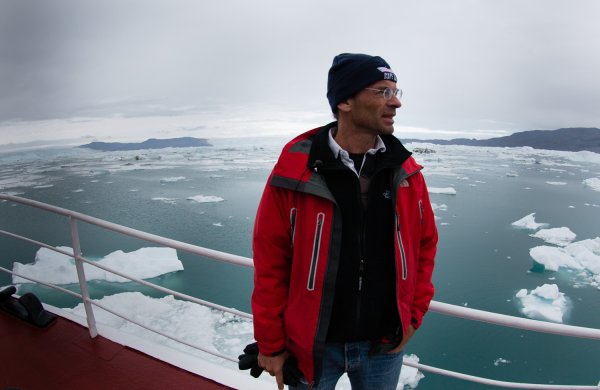 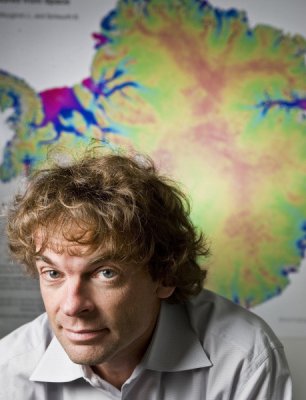 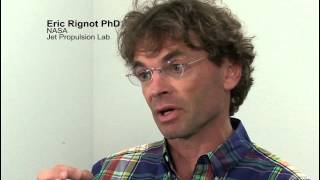 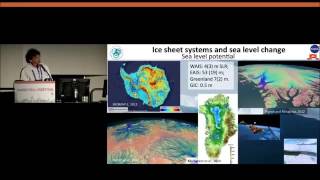 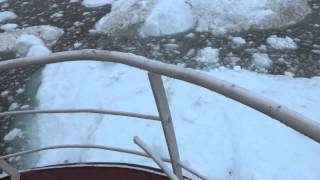 Dr. Rignot works to understand the interactions of ice and climate, in particular to determine how the ice sheets in Antarctica and Greenland will respond to climate change in the coming century and how they will affect global sea level.

In addition, he is an expert in how ice sheets in Antarctica and Greenland will respond to climate change, interactions of ice and climate, global sea level, satellite remote sensing and ocean circulation.

Awarded to Eric Rignot for fundamental innovations in the remote sensing of glacier flow, leading to the first assessments of the mass balance of the ice sheets of Antarctica and Greenland.

A striking discovery came in 2019. Using satellite data and other techniques, scientists published a new elevation map of all the crushed-down land beneath the Antarctic ice sheet. … “We dug out these data because we wanted to find out if warm water can indeed reach this glacier,” said Eric Rignot, [Earth system science Chancellor's Professor], an Antarctic expert at the University of California, Irvine and one of the authors of the paper. “The answer seemed to be yes.”

What would the Earth look like if all the ice melted? The answer is terrifying.

And yet, the extent of this effect—along with its implications for rising sea levels—is still being discounted by the global scientific community. "It's like cutting the feet off the glacier rather than melting the whole body," Eric Rignot, a study co-author and a glacier researcher at NASA's Jet Propulsion Laboratory and the University of California at Irvine, told The Washington Post. "You melt the feet and the body falls down, as opposed to melting the whole body. I think this is an example that the current projections are conservative. As we peer below we realize these feedbacks are kicking in faster than we thought."

Dr. Eric Rignot is a Chancellor Professor of Earth system science at the University of California, Irvine, and Senior Research Scientist for the Radar Science and Engineering Section at NASA's Jet Propulsion Laboratory. He is a principal investigator on several NASA-funded projects to study the mass balance of the Greenland ice sheets and Antarctic ice sheets by using radar interferometry and other methods. In 2007 he contributed to the IPCC Fourth Assessment Report WGI (Working Group I) which was awarded the Nobel Peace Prize along with VP Al Gore.

“Alpine glaciers retreat by about 1 kilometer per century, so it’s alarming to see these Antarctic glaciers receding at as much as 12 times that rate per year,” said co-author Eric Rignot, UCI Donald Bren Professor and Chancellor’s Professor of Earth system science and NASA JPL senior research scientist. “This pace is at the upper limit of what our models can replicate.”

The mission’s first job was to map the seafloor around the island to see where deep, warm water can reach glaciers. A contractor completed most of the mapping using a research boat, and OMG Deputy Principal Investigator Eric Rignot of JPL and the University of California, Irvine led smaller surveys in following years to fill in missing sections.

A substance called mélange — made up of windblown snow, iceberg bits, and sea ice — is lodged in and around arctic ice shelves and critical to holding them together, which may make the glaciers melt even faster than previously expected amid rising temperatures, according to a study at UC Irvine and NASA’s Jet Propulsion Laboratory in Pasadena. The same process may have caused an iceberg the size of Delaware to break off Antarctica in 2017, the researchers say.

To answer that question, the JPL and UC Irvine researchers focused on mélange. This messy, chunky mixture has natural properties similar to glue or grout, filling cracks or gaps and sticking to ice and rock. When it accumulates in a crack in an ice shelf, it creates a thin layer as hard as the surrounding ice that holds the crack together. At the sides of ice shelves, layers of mélange glue the ice to the rock walls around it. “We always suspected that this mélange played a key role, but until recently we did not have good observations of its characteristics,” said Eric Rignot, a professor at UC Irvine and co-author of the study, published in the Proceedings of the National Academy of Sciences.

Climate Change and the Giant Iceberg Off Greenland’s Shore

Big icebergs are nothing new, but they usually remain far offshore. Ocean currents and wind push the icebergs along, sometimes five or more miles a day. In this case, the berg got stuck in the shallow waters of the bay. Eric Rignot, a glaciologist from the University of California, Irvine, said that it probably originated from one of the nearby glaciers that flow down the fjords along Greenland’s west coast. Those glaciers have long been notable for pushing a lot of icebergs out into the sea. But nowadays they are in retreat—more ice is more rapidly breaking from the glacier’s face than snow is accumulating on its back. With climate change, what happened in Innaarsuit, Rignot said, is expected to occur more frequently. Joshua Willis, a glaciologist from nasa’s Jet Propulsion Lab, put it in simple terms: “As things continue to warm up, more ice is gonna come off and float around.” Drought-stricken South Africa wants to tow one such berg to Cape Town, to prevent the country’s taps from running dry.

The calving of Larsen C last July kindled a debate among scientists as to the cause. Some scientists claim it’s a natural, cyclical process, whereby ice shelves grow, decay, and break free, while others, such as Eric Rignot, a scientist at NASA’s Jet Propulsion Laboratory, believe it’s “the response of the system to a warmer climate.” Regardless, this is an area ripe for further investigation, as Antarctica serves as a canary in the coal mine, alerting us to the effects of human-induced climate change.

2018 We simulate the ice dynamics of the San Rafael Glacier (SRG) in the Northern Patagonia Icefield (46.7°S, 73.5°W), using glacier geometry obtained by airborne gravity measurements. The full-Stokes ice flow model (Elmer/Ice) is initialized using an inverse method to infer the basal friction coefficient from a satellite-derived surface velocity mosaic. The high surface velocities (7.6 km a ⁻¹ ) near the glacier front are explained by low basal shear stresses (1 km a ⁻¹ ). We force the model using different surface mass-balance scenarios taken or adapted from previous studies and geodetic elevation changes between 2000 and 2012. Our results suggest that previous estimates of average surface mass balance over the entire glacier ( Ḃ ) were likely too high, mainly due to an overestimation in the accumulation area. We propose that most of SRG imbalance is due to the large ice discharge (−0.83 ± 0.08 Gt a ⁻¹ ) and a slightly positive Ḃ (0.08 ± 0.06 Gt a ⁻¹ ). The committed mass-loss estimate over the next century is −0.34 ± 0.03 Gt a ⁻¹ . This study demonstrates that surface mass-balance estimates and glacier wastage projections can be improved using a physically based ice flow model.

2018 The Antarctic Ice Sheet is an important indicator of climate change and driver of sea-level rise. Here we combine satellite observations of its changing volume, flow and gravitational attraction with modelling of its surface mass balance to show that it lost 2,720 ± 1,390 billion tonnes of ice between 1992 and 2017, which corresponds to an increase in mean sea level of 7.6 ± 3.9 millimetres (errors are one standard deviation). Over this period, ocean-driven melting has caused rates of ice loss from West Antarctica to increase from 53 ± 29 billion to 159 ± 26 billion tonnes per year; ice-shelf collapse has increased the rate of ice loss from the Antarctic Peninsula from 7 ± 13 billion to 33 ± 16 billion tonnes per year. We find large variations in and among model estimates of surface mass balance and glacial isostatic adjustment for East Antarctica, with its average rate of mass gain over the period 1992–2017 (5 ± 46 billion tonnes per year) being the least certain.

2018 Ice velocity is one of the products associated with the Ice Sheets Essential Climate Variable. This paper describes the intercomparison and validation of ice-velocity measurements carried out by several international research groups within the European Space Agency Greenland Ice Sheet Climate Change Initiative project, based on space-borne Synthetic Aperture Radar (SAR) data. The goal of this activity was to survey the best SAR-based measurement and error characterization approaches currently in practice. To this end, four experiments were carried out, related to different processing techniques and scenarios, namely differential SAR interferometry, multi aperture SAR interferometry and offset-tracking of incoherent as well as of partially-coherent data. For each task, participants were provided with common datasets covering areas located on the Greenland ice-sheet margin and asked to provide mean velocity maps, quality characterization and a description of processing algorithms and parameters. The results were then intercompared and validated against GPS data, revealing in several cases significant differences in terms of coverage and accuracy. The algorithmic steps and parameters influencing the coverage, accuracy and spatial resolution of the measurements are discussed in detail for each technique, as well as the consistency between quality parameters and validation results. This allows several recommendations to be formulated, in particular concerning procedures which can reduce the impact of analyst decisions, and which are often found to be the cause of sub-optimal algorithm performance.