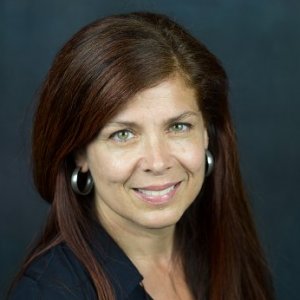 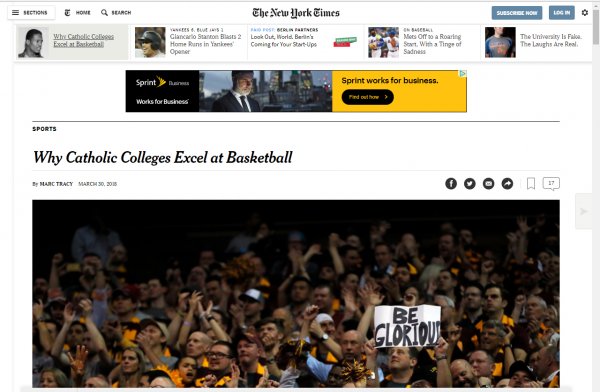 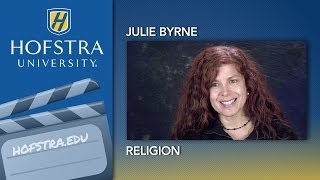 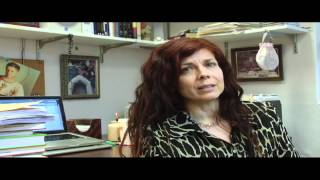 Julie Byrne holds the Monsignor Thomas J. Hartman Chair in Catholic Studies and serves as Chair and Professor in the Department of Religion. Before arriving in New York in September 2006, she taught at Duke University (2004-06) and Texas Christian University (2000-04). Her second book, The Other Catholics: Remaking America’s Largest Religion, was published by Columbia University Press in 2016. It is a cultural history of independent Catholicism in the U.S. Her first book, O God of Players: The Story of the Immaculata Mighty Macs (Columbia 2003), tells the story of Catholic women's basketball in the Philadelphia archdiocese from 1930-75. In addition to Catholic Studies, Byrne writes and teaches subjects in American religion from gender and race to method and theory. Her courses at Hofstra include “What is Religion?," "What is Catholicism?", "The Jesus Class," "Demonology," "Religion & Media" and “Race & Religion in the Americas.” She publishes popular articles and speaks frequently to the media, including The New York Times, Newsday, Frontline and Voice of America. Byrne’s professional website can be found at profjuliebyrne.com.

Writes for media, appears on television, speaks on the radio and consults for film, museums and newspapers, including The New York Times, the Washington Post, the Smithsonian,”Frontline,” Voice of America, News 12 Long Island, NY1’s “The Call,” NPR’s “Only A Game,” the Daily Beast, the Christian Science Monitor and the Religion News Service.

2022’s Most Sinful States in America

The article examines the prevalence of “sinful” behaviors, such as gambling, smoking, alcohol and drug use, inactive lifestyles, by state and what that costs the nation as a whole. Dr. Byrne said, “… if there are sins in our systems, such as in the legal system, political system, financial system, or even religious organizations themselves, then people living in those systems have a harder time being healthy and good. Sometimes they have no good choices, only ‘the lesser of two evils’ – such as when someone is choosing between not paying the rent and not paying for medicine. Both are bad, but the person does not need to repent – the system does…

Julie Byrne, Chair of the Department of Religion and Hofstra’s Monsignor Thomas J. Hartman Endowed Chair in Catholic Studies, was one of a panel of experts interviewed by WalletHub.com about this year's celebration of Easter and how it will be drastically different than usual due to the coronavirus pandemic. She addresses the impact of the pandemic on Church finances and the website's survey, which says the majority of Easter-celebrating Americans would donate a portion of their stimulus check to a religious organization. However, they also responded they are not planning to attend church this year, even if it's open.

Julie Byrne, Chair of the Department of Religion and Hofstra’s Monsignor Thomas J. Hartman Endowed Chair in Catholic Studies, was interviewed by Newsday (print and video) about Pope Francis’ recent remarks reflecting support for same-sex civil unions in a new documentary, Francesco. “The pope’s more progressive statements, for years now, have raised the ire of conservative leaders of the church, which includes many bishops in the U.S. … I think they would continue in their opposition to the progressive statement of the pope,” Dr. Byrne said in the Newsday article. The pope’s comments didn’t change church doctrine, she added.

Before moving in, families cleanse new home of 'negative energy and evil eye'

Religion Professor Julie Byrne, Hofstra’s Monsignor Thomas J. Hartman Endowed Chair in Catholic Studies, was interviewed by Newsday for a real estate article about the ancient tradition of home cleansing rituals. The house blessing is “a really common ceremony in a number of religious traditions,” Dr. Byrne told Newsday. “In some of the traditions, it goes back quite far to the millennia or centuries, and that reflects the fact that it’s a very common human impulse to want the space of your domicile to be safe and feel like a haven and feel like it’s blessed.”

How Passover 2020 and Easter are being celebrated during coronavirus, from the ‘plague’ to drive-by bunnies

Religion Professor Julie Byrne, Hofstra’s Monsignor Thomas J. Hartman Endowed Chair in Catholic Studies, was interviewed by the NJ Star-Ledger for an article about how the coronavirus and mandates for social distancing are causing families to rethink their Easter and Passover celebrations. People are also finding comfort in the themes of both holidays.

Julie Byrne, Professor of Religion and the Hartman Chair of Catholic Studies, was interviewed by The Tablet about her National Endowment for the Humanities (NEH) award for a book project using oral history, ethnography, and archives to examine tristate suburban Catholicism of the 20th and 21st centuries. The project was inspired by her interest in the impact of 9/11 on Catholic families and communities in the New York metropolitan area. Among those who perished, those of Catholic faith were an overrepresented segment. She tells the Tablet that she intends to tell the story of second- and third-generation immigrants who perished in the towers. She’ll study those who were the first in their families to hold white-collar jobs and leave the old neighborhood. Her plan is to publish the book in time for the 20th anniversary of 9/11.

Why Catholic Colleges Excel at Basketball

As the Final Four teams faced off for the 2018 NCAA men's basketball championship during Easter weekend, The New York Times interviewed Hofstra's Julie Byrne, Associate Professor of Religion and the  Monsignor Thomas J. Hartman Endowed Chair in Catholic Studies and asked her why Catholic colleges have always been so well represented in the tournament.

When it came to chronicling “Faith In America: A History,” CBS News turned to Dr. Julie Byrne, Hofstra’s Monsignor Thomas J. Hartman Endowed Chair in Catholic Studies, who discussed religious intolerance in America and the need for people to become acquainted with faiths other than their own.

Indie Catholicism is Real: Married Clergy, LGBT Ordination, and Sacramental Justice For All

I was inspired by meeting independent Catholics! At first I was aware of the existence of only one independent Catholic church, the Imani Temple in Washington, D.C. And I only knew of the Imani Temple because way back in 1988, when I was an undergraduate at Duke, I attended a mass celebrated by Father George Stallings, who was then a radical priest within the Roman church...

The Role Religion and Faith Play in People’s Lives

Dr. Julie Byrne, Hofstra’s Monsignor Thomas J. Hartman Endowed Chair in Catholic Studies, was interviewed on June 6 by Ernie Anastos of Fox5-WNYW in a special segment about faith and the varying role it can play in people’s lives.

In practical terms, the pope's new letter on marriage and the family, does nothing to help the Roman church thrive and grow — nor does it threaten any breach. For one thing, before Amoris Laetitia, divorced and remarried Roman Catholics already had options within their faith. They could stay in the church and observe norms about not receiving communion, or they could find a priest who would give them communion anyway. So, Pope Francis’s encouragement to priests to have conversations and find solutions with the divorced among the faithful won't change much. The priests who are open to it are already doing it...

Religion Professor Julie Byrne has won a National Endowment for the Humanities (NEH) award for a book project using oral history, ethnography, and archives to examine tristate suburban Catholicism of the 20th and 21st centuries. Byrne, the Monsignor Thomas J. Hartman Endowed Chair in Catholic Studies, will focus in part on the 20th anniversary of 9/11 in 2021, and how the tragedy has impacted Catholic families and communities in the New York metropolitan area. Among those who perished, those of Catholic faith were an overrepresented segment. Byrne will give an account of five men killed in World Trade Center and examine their shared cultural and religious background. Dr. Byrne’s grant is part of the NEH’s Public Scholars Program, which supports well-researched books in the humanities intended to reach a broad readership. Her grant is the only one awarded to a scholar at a Long Island institution. A total of $43.1 million was awarded for 218 humanities projects across the country.

What is Religion; Demonology; Religion & Media; Religion in the Americas;