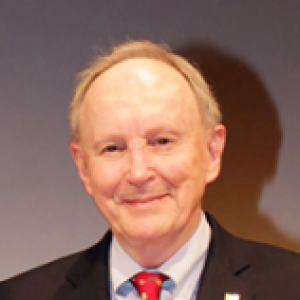 Awarded by the Society of Polymer Science, Japan

Presented by the Southwest Section of the American Chemical Society at the 14th Biennial Carl S. Marvel Symposium.

2015 Di(2-ethylhexyl) phthalate (DEHP) is a commonly employed plasticizer for poly(vinyl chloride) (PVC). Diffusion of di(2-ethylhexyl) phthalate (DEHP) takes place when plasticized PVC is immersed in hexane. Rather than determining DEHP concentration in the immersion solvent, an IR window for PVC from 1500 to 1900 cm−1 enabled direct measurement of HADD (hexane assisted DEHP diffusion) using ATR-IR by monitoring the DEHP carbonyl absorption at 1715 cm−1. The present study employed PVC containing 45% plasticizer (PVC-45, tygon tubing). A fast diffusion process was observed for short times ( 30 s. Analysis by XPS shows the outermost surface is PVC free of plasticizer after 6 min immersion. After an induction period, back diffusion coefficients Db were estimated from peak areas during a subsequent fast recovery period (10−14–10−15 cm2 sec−1). A model is proposed for the induction period associated with re-plasticization that involves a change from a mesosurface glass to a gel like solid.

2014 Investigating the surface characteristics of heterogeneous polymer systems is important for understanding how to better tailor surfaces and engineering specific reactions and desirable properties. Here we report on the surface properties for a blend consisting of a major component, a linear polyurethane or thermoplastic elastomer (TPU), and a minor component that is a hybrid network. The hybrid network consists of a fluorous polyoxetane soft block and a hydrolysis/condensation inorganic (HyCoin) network. Phase separation during coating formation results in surface concentration of the minor fluorous hybrid domain. The TPU is H12MDI/BD(50)-PTMO-1000 derived from bis(cyclohexylmethylene)-diisocyanate and butane diol (50 wt %) and poly(tetramethylene oxide). Surface modification results from a novel network-forming hybrid composed of poly(trifluoroethoxymethyl-methyl oxetane) diol) (3F) as the fluorous moiety end-capped with 3-isocyanatopropylriethoxysilane and bis(triethoxysilyl)ethane (BTESE) as a siliceous stabilizer. We use an integrated approach that combines elemental analysis of the near surface via X-ray photoelectron microscopy with surface mapping using atomic force microscopy that presents topographical and phase imaging along with nanomechanical properties. Overall, this versatile, high-resolution approach enabled unique insight into surface composition and morphology that led to a model of heterogeneous surfaces containing a range of constituents and properties.

Thickness dependence of ice removal stress for a polydimethylsiloxane nanocomposite

2014 Minimizing adhesion of ice has been the subject of extensive studies because of importance to applications such aircraft wings, spacecraft, and power transmission wires. A growing interest concerns coatings for wind turbine blades and refrigeration. Herein, a new laboratory test was employed to obtain the thickness dependence of ice adhesion for Sylgard 184—a filled polydimethylsiloxane elastomer. A correlation between ice adhesion and coating thickness (t) was found that follows a relationship developed by Kendall over 40 years ago for removal of a rigid object from an elastomer. With a 0.05 mm/s probe speed a nearly linear relationship between peak removal stress (Ps) and 1/t1/2 was obtained with Ps ∼ 460 kPa for an 18 μm coating, decreasing to ∼120 kPa for 533 μm. Preliminary results suggest that below ∼10 μm Ps departs from the 1/t1/2 correlation while above ∼500 μm a limiting value for Ps may be reached. We previously reported that probe speed has negligible effect on the glassy polymer PMMA. In contrast, probe speed is identified as an important variable for testing ice release on elastomeric Sylgard 184 coatings. While work of adhesion, which is related to surface free energy, is recognized as an important factor that can affect ice release, the results reported herein show that coating thickness can override this single parameter for elastomeric substrates.