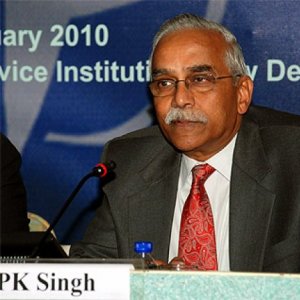 Former General Officer Commanding-in-Chief South Western Command and Colonel Commandant, Regiment of Artillery, PK is now the Director of United Service Institution of India, a leading defense and strategy organization founded in 1870. He is advising Fair Observer in issues pertaining to India, international relations, and the strategies of great powers.

During a military career spanning 41 years, he saw active service in the Western, Northern, and North Eastern theatres including the 1971 Indo-Pak War, and held several critical command and staff appointments. He was also the Deputy Director General of Military Intelligence overseeing the Foreign Division at the Army Headquarters and was instrumental in shaping India’s military diplomacy.

PK is not just a decorated soldier but a noted scholar. He has numerous graduate qualifications and was a member of the Faculty at the Defense Service Staff College in Wellington, the Indian Military Academy in Dehradun, the School of Artillery in Devlali, and the Computer Technology Wing of the Military College of Telecommunication Engineering in Mhow.

Dealing With Crises in Afghanistan and Pakistan: Military Perspectives

The United Service Institution of India (USI) is a unique institution with unequalled expertise in the field of national security and matters pertaining to defence services. It has built an outstanding reputation over the last 140 years. The USI has ongoing bilateral dialogues with similar institutes in many countries and it is expanding.

Panel Chair: EU and India Contribution to UN Peacekeeping and Peacebuilding – Principles for a Common Effort