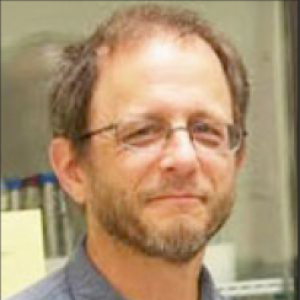 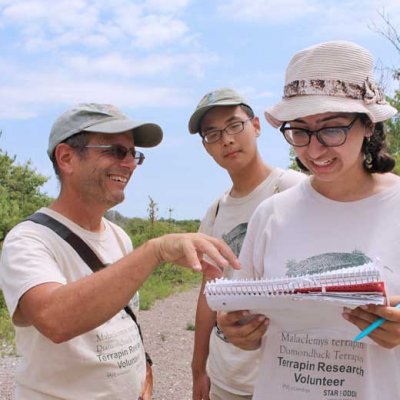 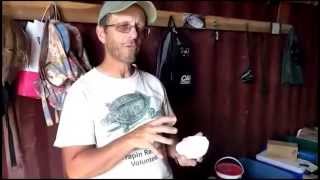 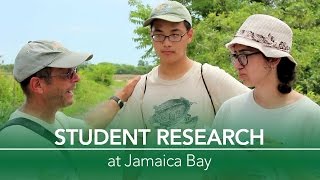 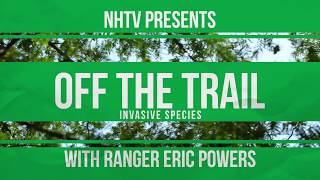 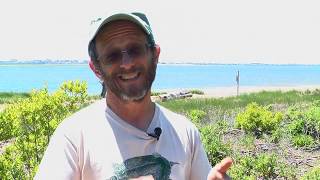 Dr. Burke is interested in the ecology, evolution, and conservation biology of vertebrates, mostly reptiles and mammals. Most of the species he studies are either introduced species or rare species, thus population control (either up or down) is important to him. And because a lot of his field work takes place in the urban and suburban habitats of New York City and Long Island, it is often referred to as Urban Ecology.

“Multiple individuals will be dispersing and looking for new territory,” said Russell L. Burke, chairman of Hofstra University’s biology department. “Eventually, all the spaces on Long Island that can take coyotes will be filled. That might take 50 years, but by then we’ll all be used to it.”

Diamondback Terrapins Thrive Where Others Can’t

A female terrapin lays one or two clutches of eggs, each containing anywhere from three to 18 eggs — if she is not hit by a car, waylaid by a roadside curb, tangled in vegetation or killed by a raccoon. Research conducted by Russell Burke of Hofstra University suggests that less than 3 percent of turtle eggs in Jamaica Bay survive; this is troubling in the context of an ever-increasing population of urban raccoons, but not unusual throughout the terrapin’s range...

The turtle population around Jamaica Bay had also been kept in check by raccoons, which are natural predators of the newborn terrapins. Dr. Russell Burke, a biologist at Hofstra University, hypothesized that something must have happened to the raccoons at JFK several years ago that led to the survival of those eggs that were laid in the area.

There they were — a couple of dogs in the middle of the road, ravaging a neighbor’s trash. Or were they?

One goal of the group of 12 to 15 researchers is to prepare the public, letting residents know that, like raccoons and opossums, coyotes "are very afraid of humans and will stay as far away as they can get," said Russell L. Burke, chairman of Hofstra University's biology department. He is one of six co-authors of "Coyotes Go 'Bridge and Tunnel,' " a report on the value of starting research and education programs well before the creatures' mass arrival.

If you take the ‘A’ train to the end of the line in Queens, you land at Jamaica Bay, where salt marshes support endangered birds and rare turtles.

Studying What Lures Turtles to a Tarmac at Kennedy Airport

But on that July day five years ago, Russell Burke, the chairman of the biology department at Hofstra University, said, “Something made a huge number of turtles come up to Runway 4L.” Two years later, it happened a second time. And on Thursday, a group of turtles appeared on Runway 4L yet again, despite recent steps aimed at keeping them away. For Dr. Burke, who has long studied the terrapins that live in the wildlife refuge, the reptiles’ repeated forays onto the tarmac are the subject of serious study. Shortly after the first invasion, the Port Authority of New York and New Jersey enlisted him to help it come to a better understanding of the turtles and their mysterious ways. As part of that effort, he works closely with the Port Authority’s chief wildlife biologist, Laura Francoeur, who described the turtle takeovers as among the more vexing challenges confronting her unit...

Ecology, conservation, and sex determination of diamondback terrapins Ecology and conservation of wood turtles in northern NJ The effects of tick host species diversity on Lyme Disease risk Box turtle resources use and its life history implications The effects that the coyotes making their way to Long Island will have on current vertebrate communities Novel ways of estimating the number of vertebrates in an area; this includes using parasite densities to estimate local terrapin numbers, and using camera traps to count mammals

Why Lyme disease is common in the northern US, but rare in the south: The roles of host choice, host-seeking behavior, and tick density

Ticks in the southeastern US search for hosts in different ways than those in the northeast, which accounts for the fewer human cases of Lyme Disease in regions to the south, according to a study co-authored by Hofstra Professor of Biology Russell Burke. The results of the project were published in PLOS Biology. Burke says that lizards are the host choice for ticks in the southeast US. In the US and Canadian northeast, where the lizard population is much smaller, Lyme Disease cases are more prevalent. In this area, mice and other mammals are ticks’ host of choice. Ticks like to feed on both lizards and small mammals, but lizards are much less likely to pass along the bacteria that cause Lyme disease. The analysis also showed that southern ticks tend to stay below leaf litter (dead plant material on the ground) when seeking hosts, while northern ticks tend to climb atop leaves and twigs, making it more likely that they would bite passing humans. For more than a decade, Dr. Burke – with the assistance of graduate students Eric Rulison, Kaetlyn Kerr Jackson, and Breann Ross – has conducted field work at the Savannah River Site in South Carolina and the Franklin Parker Preserve in the New Jersey Pine Barrens. Undergraduate students have also been involved by analyzing collected data. Supported by the National Science Foundation Ecology of Infectious Diseases Award, the research study was led by Howard Ginsberg of the U.S. Geological Survey’s Patuxent Wildlife Research Center. It involved a total of eight field sites up and down the eastern and central US.

2017 In species or developmental stages where the sex of an individual cannot be reliably identified through external morphology, molecular markers can provide a critical tool to study sex-specific traits that are elusive otherwise. Here we generated two sets of sex-diagnostic PCR primers for each of two focal turtle species with contrasting genotypic sex determination (GSD) systems: the wood turtle, Glyptemys insculpta (XX/XY), and the spiny softshell turtle, Apalone spinifera (ZZ/ZW). These markers identified males and females with 100% accuracy as validated with numerous individuals of known sex...

Cities and the Environment

Currently, Long Island, NY is without a breeding population of northeastern coyote (Canis latras var.), yet recent evidence of dispersing individuals on the island, coupled with the “dogged” momentum of coyote range expansion across North America, suggests a Long Island coyote population is close at hand. We highlighted the fleeting opportunity to takes advantage of this natural experiment by developing a multidisciplinary research framework to investigate the ecological and social impacts of the coyote, pre- and post- range expansion. We reviewed coyote spatial ecology, community ecology, and human dimensions research and identified three components of future investigation: predicting future occupancy, monitoring colonization, testing hypotheses of trophic cascades by leveraging and expanding existing ecological data, and exploring attitudes towards coyotes to better understand and mitigate human-wildlife conflicts. Each proposed component will integrate for a comprehensive investigation to advance theory and applied management of northeastern coy

2005 We simulated nests constructed in an area heavily used by ovipositing Diamond-backed Terrapins (Malaclemys terrapin) and foraging raccoons (Procyon lotor), to investigate the cues used by raccoons to locate terrapin nests. Marking nests with flags did not increase predation rates, and human scent decreased predation rates. Raccoons seemed to locate nests based on soil disturbance, ocean-water scent, or a combination of these cues...

2003 We studied Diamondback Terrapins, Malaclemys terrapin, at Gateway National Recreation Area, New York. We found evidence of nesting terrapins at three locations within the Recreation Area and focused our research on the islands of Jamaica Bay Wildlife Refuge. Female terrapins nested from early June through early August and oviposited at least two clutches per year...