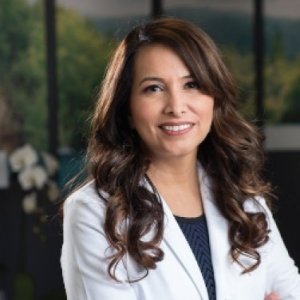 
Dr. Malik is a leader in preventative cardiology and the practice of integrative healthcare. 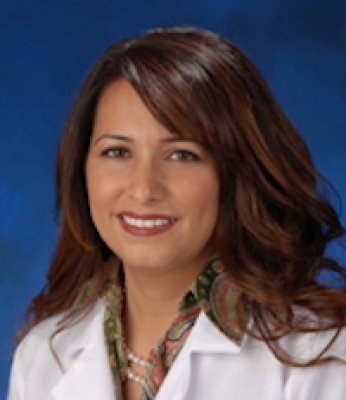 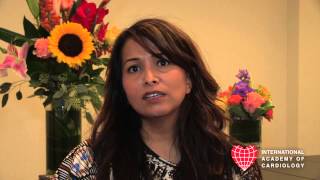 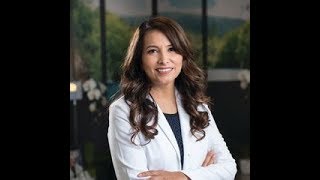 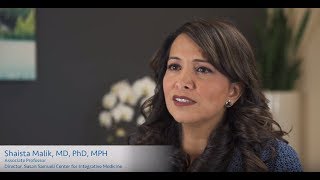 Shaista Malik did her undergraduate work at Stanford University and then did her masters in public health and PhD at UCLA. She has been at UC Irvine since medical school and stayed at UCI for her residency in internal medicine, cardiology fellowship, and was chief cardiology fellow. Dr. Malik is a clinical scientist, she sees patients, teaches, and does research. She is an investigator on several National Institute of Health (NIH) grants, including a career development award, a K23, from NIH (NHLBI) looking at the role of cardiac CT in those with diabetes. She was also recently awarded a prestigious large research project grant, a RO1, looking at the root causes, including the genetics of heart disease. Her research interests include prevention of heart disease and women’s heart disease. She has helped write national guidelines on training cardiologists as well as American College of Cardiology position paper on cardiovascular imaging in diabetes. She has also edited two books and written several book chapters. She is a section editor for three medical journals. Dr. Malik is the Susan Samueli endowed chair of Integrative Medicine, director of the Susan Samueli Institute for Integrative Medicine, director of the women’s heart disease program, and the medical director of the preventive cardiology and cardiac rehab program.

Front-line healthcare workers need more than just protective gear to stay safe during the COVID-19 pandemic. Their well-being also requires managing the anxiety, stress, grief, pain and fatigue that naturally arise from the nature of their work. That’s why the Susan Samueli Integrative Health Institute has stepped up to offer in-person wellness services for employees at UCI Medical Center‘s Douglas Hospital. “Our UCI healthcare providers, nurses and staff are facing the most challenging time in their medical careers,” said Dr. Shaista Malik, executive director of the institute. “It’s been truly inspiring to see how dedicated they are to their patients and our community. It’s imperative that they stay healthy both mentally and physically for themselves, their families and patients.” The services – which include acupressure, ear seed placement, qi gong breathing techniques, yoga therapy and massage – are delivered at the hospital during breaks as well as before and after shifts. “Our integrative health practitioners provide whole-person care to address the mind, body and spirit,” Malik said. “Our hope is to equip medical workers with tools to manage their stress and anxiety, maintain sleep quality and support their overall well-being.”

Students will take cross-disciplinary courses in “the best of many different worlds of medicine,” including traditional treatments such as acupuncture that are backed by research, said Shaista Malik, a cardiologist and executive director of the Susan Samueli Integrated Health Institute. The institute will have a home at the new health sciences college.

Shaista Malik, MD, PhD (University of California, Irvine), whose own research focuses on the use of acupuncture in CV medicine, particularly hypertension, said: “This is an excellent and well-done study because it actually looked at using targeted acupoints for a very specific indication.”

Henry Samueli reiterated that he is a believer in integrative health. His personal physician is Shaista Malik, the director of the Susan Samueli Center for Integrative Medicine at UCI -- which he called “Susan’s center.” Malik monitors Henry Samueli's blood chemistry, adjusts his supplements and cholesterol medication, and makes sure he maintains a healthy lifestyle, he said. He credited his wife for his conversion to the health practices.

‘Defeating Stress’: Doctor Says Yoga, Meditation — And Even Faking A Smile — Can Help

According to Dr. Shaista Malik, stress can take a huge toll on the human body, especially the heart.

COVID-19: Where We Are & What to Expect Next

2020 We have shown that 8‐week electroacupuncture (EA) at P5‐6 and St36‐37 reduces blood pressure (BP) (70% effectiveness, BP decrease of ≥ −6 mmHg in peak or average systolic or diastolic) and norepinephrine in a group of male and female (38–75 year) patients with mild to moderate hypertension (HTN). During the 8 EA sessions, the onset of the BP reduction was observed by week 4, while these patients were not on antihypertensive medications. BP reduction with 30‐min EA once a week treatment at P5‐6+St36‐37 as such is defined as sympathoinhibitory.

2020 Stimulation of the auricular branch of the vagus nerve (ABVN) is used to manage cardiovascular disorders, including elevated blood pressure. However, precise mechanisms underlying its effects remain unclear. One previous study showed that ABVN stimulation with acupuncture at the center of the inferior concha (the “heart acupoint,” CO15) activates neurons in the nucleus tractus solitarii (NTS) through vagal inputs. Still, its actions on NTS processing and downstream influence on the nucleus regulating cardiovascular function have not been studied.

2020 A study of excited baryons is reported, based on a data sample collected in 2016–2018 with the CMS detector at the LHC in proton-proton collisions at a center-of-mass energy of 13 TeV, corresponding to an integrated luminosity of up to 140. The existence of four excited states: , , , and in the mass spectrum is confirmed, and their masses are measured. The mass distribution exhibits a broad excess of events in the region of 6040–6100 MeV, whose origin cannot be discerned with the present data.

2019 Acupuncture increasingly is accepted as a potential therapy for many diseases in the Western world. However, the mechanism of acupuncture is not well understood mechanistically. We have established that manual acupuncture (MA) at the Neiguan (P6) acupoint inhibits excitatory cardiovascular reflex responses through modulation of the autonomic nervous system in the brainstem. It is unclear whether P6 MA activates neurons in the brain regions beyond the brainstem.