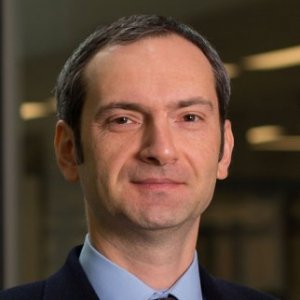 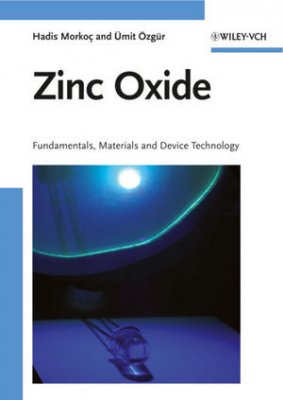 Dr. Özgür received his Ph.D. from Duke University in 2003 and worked at VCU as a postdoctoral research associate from 2003 to 2008 and as an instructor from 2007-2008. He joined VCU Electrical and Computer Engineering Department as an Assistant Professor in 2008. His primary experience is in optical characterization of dielectric and semiconductor materials and devices. He has been responsible for many contributions to the understanding of ultrafast carrier dynamics in nitride heterostructures, including generation and control of terahertz coherent phonons in nitride multiple quantum wells, and mechanisms limiting GaN-based LED efficiencies at high injection levels. His efforts also helped produce high quality GaN thin films with low dislocation densities and the best known carrier lifetimes. He has authored 1 book, 4 book chapters, and over 120 journal publications, contributed to more than 100 conference proceedings and presentations, and given 6 invited talks on growth, fabrication, characterization, and electronic and optoelectronic applications of semiconductor heterostructures, nanostructures, and devices. He has served as a principal investigator and co-principal investigator for several NSF, DoD, VCU, and industry funded projects. His current research focuses on ultrafast optical spectroscopy of semiconductor heterostructures and nanostructures, light emitting diodes for general lighting, zinc oxide electronics, perovskite solar cells, nanostructured biosensors, and pixel scale narrow bandpass filters for infrared spectroscopy. Dr. Özgür teaches courses on electromagnetic fields, electronic devices, microwave engineering, nonlinear optical materials and devices, and semiconductor optoelectronics and serves as the Graduate Program Director in the Electrical and Computer Engineering Department. He is a senior member of IEEE, member of APS, and member of SPIE. 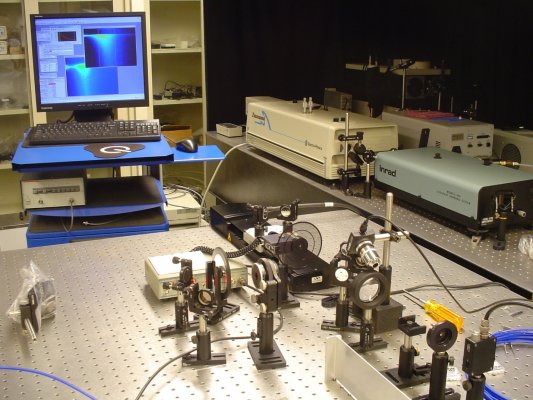 2016 We reported on the polarity control of ZnO grown by plasma assisted molecular beam epitaxy on (0001) GaN/sapphire template simply via the oxygen-to-Zn (VI/II) ratio during nucleation growth at 300 °C. The authors have demonstrated that ZnO polarity can be inverted, thus O-polar ZnO can be grown even if the (0001)GaN surface is kept under continuous Zn beam exposure prior to the nucleation growth. Following the Zn pre-exposure, ZnO nucleated with VI/II ratio below 1.5 showed Zn-polarity and those nucleated with VI/II ratios above 1.5 exhibited O-polarity. Scanning tunneling electron microscopy (STEM) imaging reveals that polarity inversion takes place without formation of any vertical inversion domain and within one monolayer of presumably non-stoichiometric GaOx at the interface. A direct correlation between polarity and residual strain sign was found. Zn-polar ZnO were under tensile biaxial strain whereas the O-polar material showed compressive strain. Moreover, the amount of strain varied linearly with the VI/II ratio used during low-temperature nucleation growth. 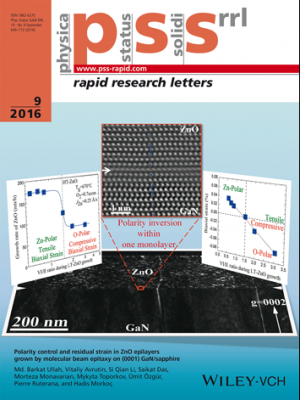 2016 We studied the tunability of energy gap and carrier dynamics in colloidally synthesized 2.0±0.8 nm Ge1−xSnx QDs (x = 0.055 − 0.236) and developed a model for their radiative recombination pathways. Energy gaps at 15 K, as deduced from steady-state PL measurements, were confirmed to reach the visible spectral range, varying from 1.88 eV to 1.61 eV by changing Sn content from x = 0.055 to x = 0.236, respectively. Taking the size and compositional variation of these QDs into account, experimental energy gap values were fairly consistent with theoretically calculated ones. PL decay times were found to be 3 − 27 μs at 15 K due to the slow recombination of spin-forbidden dark excitons and recombination of carriers trapped at surface states. They dramatically decreased to 9 − 28 ns at room temperature owing to the thermal activation of spin-allowed bright excitons and carrier de-trapping from surface states. 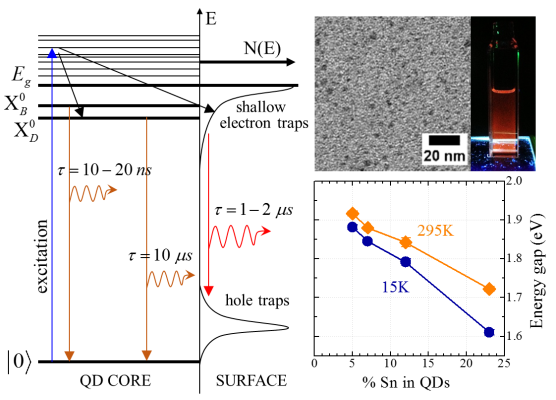 The production of high-efficiency optoelectronic materials based solely on low-cost, non-toxic, and abundant Group IV elements such as silicon is challenging as Group IV elements are less efficient in electron-photon conversion process compared to the widely used optoelectronic materials. This project utilizes the unique nanoscale size confinement effects and alloying with tin to produce silicon-tin, germanium-tin, and silicon-germanium-tin nanocrystals that exhibit superior light absorption and emission properties. The collaborative team supports the synthetic efforts along with advanced optical characterization and theoretical calculations to garner a deep understanding of the emerging materials properties and enhance the optoelectronic performance. The interdisciplinary research provides valuable training to the graduate and undergraduate students in the areas from smart material design to device testing. Other education and outreach activities include K-12 nanoscience outreach efforts and involving the under-represented high school students and women in summer research activities.

Fundamentals of engineering electromagnetics, including electrostatics, magnetostatics, electrodynamics, analysis and understanding of the phenomena associated with electric and magnetic fields, wave dynamical solutions of Maxwell's equations, reflection and transmission of electromagnetic waves in dielectric materials, waveguides and transmission line structures, and radiation from antennas.

Wireless and optical communications applications of electromagnetic fields. Theory of microwave transmission line and waveguiding structures including impedance transformation and matching. Essential concepts from geometrical and physical optics and the interaction of photons with materials will be studied. Operating principles and design considerations of fiber optics, photodetectors and receivers are considered.

Discussions of optical processes in semiconductors and semiconductor heterostructures in terms of radiative and nonradiative processes, as well as absorption. Also covers in depth the theory and practice of light-emitting diodes, including those intended for solid-state lighting, lasers and detectors.

Enhancement of Be and Mg incorporation in wurtzite quaternary BeMgZnO alloys with up to 5.1 eV optical bandgap

Ballistic transport in InGaN based LEDs: impact on efficiency

2011, Topical issue in honor of the Nobel Laureate Zh. I. Alferov

ZnO Devices and Applications: A review of current status and future prospects

A comprehensive review of ZnO materials and devices